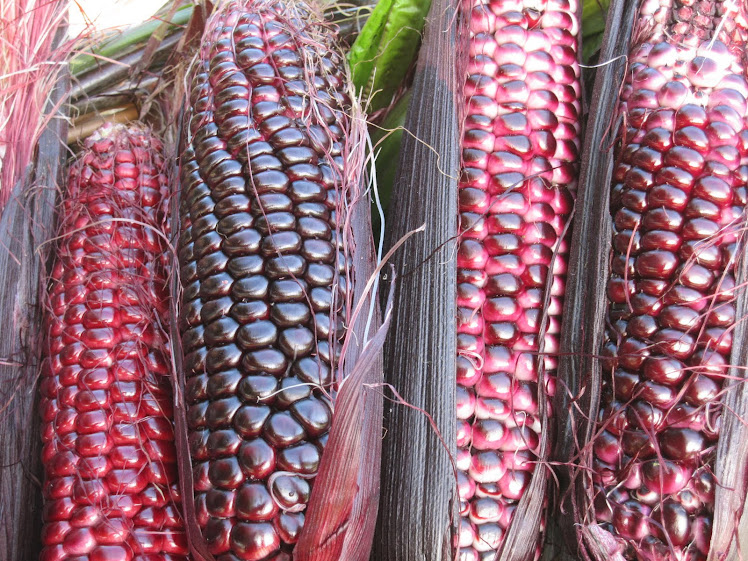 by Alan M. Kapuler Ph.D. and Kusra Kapuler
Comment by AMK as of 1-16-2005: new aspects of relationships among living organisms are now continually being revealed by the 'omic' sciences. The following paper written several years ago combined molecular biology with kinship gardening. In the interrum, the APG (Angiosperm Phylogeny Group) has updated their work (2003) and I will update the biodiversity based kinship gardening layout for the world flora in the near future.


The Andean people of montane Southamerica have developed more root crops than any other people in the history of the earth. While potatoes (Solanum tuberosum, Solanaceae) are familiar to us, many of the other root crops found in the rocky mountain cordillera that extends first east to west in Venezuela and Colombia and then north to south from Equador to Chile, are not. These include oca (Oxalis tuberosa, Oxalidaceae, the tuberous rooted Shamrock clover), ulluco or melloco (Ullucus tuberosus, Basellaceae), maca (Lepidium meyenii, tuberous rooted cress, Brassicaceae), arracacha (Arracachia xanthorhiza (Andean carrot, Apiaceae), achira (Canna edulis edible canna, Cannaceae), mashua (Tropaeolum tuberosum, tuberous rooted nasturtium Tropaeolaceae) and yacon (Polymnia sonchifolia tuberous rooted Andean daisy, Asteraceae). In this article I will discuss several realms of discoveries that concern yacon.
Yacon has been in cultivation as a food and medicinal plant for at least a millenium. It is of interest to gardeners, farmers, consumers, elders, diabetics, weight watchers, raw foodists, dieticians, biochemists and foodies in general.
As a garden plant, yacon grows 4-8’ tall with soft attractive leaves, pliable stems like a sunflower, and makes edible tubers in 3-6 months after planting in mid-spring. Yields are double to triple that of potatoes. The largest tubers are 1-3 pounds and look like sweet potatoes. Occasionally 3-5 pound tubers are found. For high yields, thorough and frequent watering in late August thru mid September is essential. When harvested the somewhat fragile tubers are clear to translucent white. After curing for 1-2 weeks in the sun, on a shelf or in a greenhouse, the skins turn red-purple and the tubers become much sweeter.
A relative of dahlias and Jerusalem artichokes, yacon is a plant with multiple uses.
Health Promoting Aspects of the Tubers:
While yacon has been a traditional Andean foodplant originating in Peru and grown from Venezuela to Chile for centuries, only recently has it become of interest to the rest of the world. It was grown in Italy in the mid 1930’s and currently it is an important crop in the Czech Republic and New Zealand. Japanese scientists in the late 1980’s found that yacon tubers stimulates the growth of probiotic microbes, particularly bifidobacteria (like the ones found in human breast milk) and lactobacilli (like ones found in sauerkraut and kimchi fermentations), in our large intestine. At the same time the numbers of putrifying bacteria like clostridia and coliforms are reduced..Conjugates of sucrose with fructose produce inulofructans, short chain polymers, in the yacon tubers. The chain length of these polysaccharides is predominantly 3-7 and they are easily broken down by lactobacilli and bifidobacteria. The human intestinal system cannot break down these fructose polymers explaining why for many years nutritional content of yacon was considered rather low.
The sweetening of yacon tubers with storage indicates that the tuber produces an enzyme which hydrolyzes fructose and sucrose from the inulins. From crystalline and crunchy whiteness with very little flavor, the tubers become very sweet and somewhat softer, thirst-quenching and a welcome treat during fall, winter and in the early spring..
Recent studies of the composition of the tubers reveals that anti-oxidant phenolic acids, chlorogenic acid, ferulic acid, caffeic acid and their derivatives are present in the tubers of yacon. These compounds are active free radical scavengers (J. Chromatographic A. 2003 1016:89-98). Free tryptophan, one of the essential amino acids for protein synthesis and for human neurotransmitters like serotonin, in the tubers has also been reported (J. Agric. Food Chem. 1999 47:4711-13).
Thus yacon tubers improve the health of our digestive system and by promoting the growth of probiotic bacteria may be supplying us with B vitamins as well.

Health Promoting Aspects of the Leaves:
The use of the leaves for tea has only recently become of great interest.
Water extracts of the leaves of yacon are able to reduce the sugar content of our blood by increasing the amount of circulating insulin (J. Ethnopharmacol. 2001 74:125-32). Thus use of yacon tea may help those suffering from oxidative stress as in diabetes. In Japan and Brazil, the tea is used medicinally (Cell Biol. Toxicol. 2004 20:109-20).
Free radical scavenging anti-oxidants are found in the leaves as well as in the tubers. Chronic illnesses like atheriosclerosis may be remedied by including yacon tea in the diet (European J. Nutr. 2003 42:61-66).
Further studies of aromatic compounds in the leaves of yacon find six anti-microbial sesquiterpene lactones, one of which, fluxtuanin, is most active against gram-positive bacteria like Bacillus subtilis (Biosci. Biotech. Biochem. 2003 67:2154-9).
Thus yacon leaves provide a tea with several different health promoting aspects.

An Example of a Non-violent Foodplant:
Since the tubers have no eyes, they cannot serve for propagation which is done by dividing the central crown, by cuttings or from growing up plants from cells in tissue culture. Since the plants have a 4-6 month growing season and flower in October to November, they rarely make fertile seeds. Crowns are overwintered and split in the spring before planting out.
All the other tuberous rooted plants used for food are propagated from eyes that grow from the tubers: potatoes, oca, sweet potatoes, mashua, true yams (Discorea species), groundnut (Apios species), Chinese artichoke (Stachys affinis).. Other edible root and bulb crops also have eyes on the top; carrots, parsnips, radishes, onions, garlic, turnips, etc . Yacon is unique in this respect. The edible tubers have no eyes.

Soil Improvement Following Cultivation:
After 15 years of cultivating yacon, I have seen improved soil tilth, the crumbly fertileness that is associated with good humus content, water retention and growth promotion. It has allowed me to posit connections between the inulin polymers made in the roots and the bacteria that make up a significant part of the biomass of organic soil, an a way analogous to what happens when yacon as a food promotes health promoting bacteria in our large intestines.
George Hendry has an analyzed the British flora in relation to the production of inulins and their shorter members called fructo-oligosacchariders. He found that 15% of the British flora make inulins and fructo-oligosaccharides. The predominant flowering plant groups that contain these fructose polymers are the daisies (Asterales), the grasses (the plants of corn, barley, oats, rye) (Poaceae) and the alliums and other members of the order Asparagales, which includes the agaves (the fermentation of agaves to make tequila is based on inulin polymers). Fructans are also found in bacteria, mosses, liverworts and occasional fungi and algae. This physiological characterisitic shared by members of the grasses (Poaceae, alliums (Alliaceae) and daisies (Asteraceae) reminds me of the biodynamic concepts of guilds, plants that are routinely found growing together. Since these plants are major components of temperate ecosystems, the carbon-rich inulins produced by them appear to be important contributors to the carbon requirement of the microbial ecosystems that flourish in their rhizospheres.
Recently, I asked Dr. Norman Pace, Professor of Microbial Ecology at University of Colorado in Boulder, Colorado, about the relationship between soil microbes, fertility and the production of polysaccharides in the soil. He suggested that recent discoveries in microbiology identifying cooperative communities of bacteria called biofilms may have to do with the development of the fertility of the soil. These widespread bacterial communities are ordered structures of different kinds of bacteria analogous to organ systems of animals. The heterogeneous bacterial communities are structured by extra-cellular polymeric molecules made of sugars, amino acids and nucleotides.
This leads to the idea that organic soil is a three-dimensional biofilm fed with carbonaceous polysaccharides produced by certain groups of plants promoting certain groups of, as yet unidentified bacteria and fungi. We know that rhizobia in legumes and Frankia mycobacteria in other Rosid 1 clade plants fix nitrogen in genetically cooperative systems. Connections between nitrogen-fixing and polysaccharide-utilizing bacteria are likely a core combination in the development of fertility and sustainability in the temperate zone.
Commercial Products:
Yacon grows in the mountains from 3-7000 feet elevation in Southamerica along the cordillera of the Andes, from the north in Colombia and Venezuela to Bolivia and Chile in the south. In New Zealand, dried yacon chips are sold as an export commodity to the food and health conscious in Japan. The Japanese have fructo-oligosaccharide commercial products including one called neosugar which has become an alternative sweetener. The Japanese also use chunks of yacon as a component of yoghurt. In Peru, the tubers are squeezed and a thickened sweetener like molasses is produced for commerce.
In the USA I first saw it growing in Steven Spangler’s garden in Vista, California in the late 1980’s. Rick McCain of Quail Mountain Herbs in Watsonville, California and Jerry Black of Oregon Exotics promoted its cultivation during the mid 1990’s and Peace Seeds, Corvallis, Oregon grew enough crowns during the past few years to further the distribution of yacon through Seeds of Change in Santa Fe, New Mexico, Nichols Garden Nursery in Albany, Oregon and Sow Organic Seeds in Williams, Oregon (organicseed.com). It is also available through the Seed Saver’s Exchange in Decorah, IA.

Summary:
The Andean daisy yacon has many virtues. The tuberous roots are a health promoting food either eaten raw or cooked. The leaves as a tea also have health promoting properties. As a gardeners plant, yacon improves the fertility of the soil in which it is grown. It produces 2-3 times the yield of potatoes and has been successfully grown from Maine to Oregon in the USA. The clump-forming plants grow from 4-8’ tall depending on the length of the growing season and the abundance of water. It does not become weedy and is thus far free of disease. During the past several years, new scientific studies of the health promoting molecular components of yacon tubers and leaves provide increasing support for including it in our diets and gardens.